The whole chapter of the east China sea dragon palace is generally more difficult than the previous one.Especially in the middle level, if you don't pay attention to small details at the beginning, it is easy to fail the level or complete additional small tasks.Today small make up to you is the east China sea dragon palace 5-9 checkpoint clearance strategy, hope to help you.

First let's take a look at some additional tasks:

And then we play with these little missions. Secondly, when there is enough gold, don't rush to upgrade the previous heavenly soldier. Create another heavenly soldier in the above picture to help fight monsters and play props at the same time.At this point, the free soldiers can knock out the surrounding props. Next, create the third heavenly soldier in the position above to finish off the left props. When you find the hidden patronus, your combat power will be greatly improved. 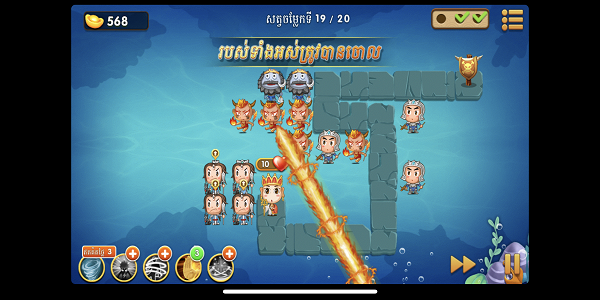 Isn't it easier to get through and complete additional small tasks? Have a good time!